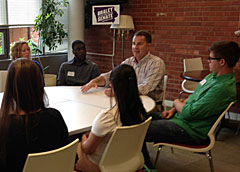 Government-backed student loans are the new battleground in Iowa’s U.S. Senate race between Democrat Bruce Braley and Republican Joni Ernst. Braley has visited four Iowa college campuses this week to hold round-table discussions with students about college debt, to highlight some of his opponent’s statements.

“The choice couldn’t be clearer between the two of us,” Braley said after an event at Drake University. “She says she wants to abolish the Department of Education which oversees the Pell Grant program which distributes $350 million to Iowa college students, the federal student loan program which loans $1 billion to Iowa students — and she wants the federal government out of the student loan business.”

During the Republican primary campaign, Ernst expressed support for privatizing student loans. Yesterday, Ernst was asked about the issue.

“Before we got rid of any government-backed student loans, I would want to know what we’re replacing it with,” Ernst said during an interview after a campaign event in Indianola. “So it’s not just about doing away with government-backed loans, but making sure we’re finding a solution and, really, what is underlying is the excessive cost of education in the United States, so I think we need to get at that issue also.”

“We heard today from students what a dramatic additional financial burden that would be for them if they’re borrowing money at 12 to 18 percent,” Braley said Tuesday, “which is what many of them are forced to do depending upon their own credit history in the private marketplace.” 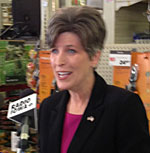 Ernst said finding out why college tuition rates are rising so rapidly should be a goal for policymakers.

“Perhaps all of our students don’t need four-year degrees,” Ernst said. “I just heard from a group yesterday that said we really need those trade skills out there, those people that go to trade schools, not necessarily four-year schools.”

Both Ernst and Braley got undergraduate degrees from Iowa State University and both financed part of that education with government student loans.