A state senator who resigned after being accused of taking payments to work on a 2012 presidential campaign has pleaded guilty to taking $73,000 worth of what prosecutors call “under-the-table” money.

The U.S. Department of Justice today announced 42-year-old Kent Sorenson of Milo has pled guilty to one count of obstruction of justice and one count of causing a presidential campaign to falsely report its expenditures to the Federal Election Commission.

Sorenson had been the chairman of Michele Bachmann’s campaign for the Iowa Caucuses, but Sorenson now admits he started secret negotiations in the fall of 2011 to switch to the Ron Paul camp, in exchange for money. Prosecutors say some of the $73,000 paid to Sorenson was concealed by transferring the money to a film production company and then to a second company before it got to Sorenson.

In his plea agreement, Sorenson admits he lied to a lawyer hired by the Iowa Senate Ethics Committee to investigate the allegations that Sorenson was paid to work on a presidential campaign, which is a violation of senate rules. Sorenson will be sentenced later. 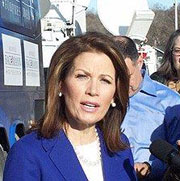 Michele Bachman at a 2011 news conference.

Sorenson resigned from the state senate in October soon after the independent counsel hired by the Iowa Senate Ethics Committee released a report concluding it was “manifestly clear” that Sorenson was paid to work on Bachmann’s presidential campaign. Senator Wally Horn of Cedar Rapids leads the Senate Ethics Committee.

“Iowa is squeaky clean, even though once in a while we have a problem,” Horn told Radio Iowa an hour after Sorenson resigned.

Sorenson sent an email to supporters last October saying he “did not do anything illegal” or “immoral.” Sorenson accused his attackers of a “witch hunt” and he argued the investigation had been “rigged” against him because of his public opposition to the Iowa Supreme Court’s gay marriage ruling. The first person to publicly accuse Sorenson of taking money to jump ship and join the Ron Paul campaign was Michele Bachmann.

Bachmann made those comments during a news conference on December 29, 2011 — the day after Sorenson attended a Ron Paul rally to announce he was jumping from Bachmann to Paul’s camp.

“Mr. Sorenson’s pleas are part of the process of taking complete responsibility for the series of compounding errors and omissions he engaged in, aided and abetted, and participated in with others,” Brown wrote. “…This is a very sad day for Mr. Sorenson, his family, and his friends, many of whom were in attendance in court. To the extent others may take glee with his predicament, there is nothing that can be done.”

Sorenson owned and operated a cleaning business in Indianola before his election to the Iowa House in 2008, then he won a seat in the Iowa Senate in 2010. In a September 19, 2013 deposition that was part of the Iowa Senate Ethics Committee’s investigation of the allegations against Sorenson, he was quizzed about why he was being paid by the Ron Paul campaign.

“What was the consulting work that you were doing?” asked Mark Weinhart, the independent counsel investigating the case for the ethics committee.

Sorenson replied: “I don’t think that’s relevant to the investigation…I’m not going to answer the question.”

Sorenson, in his answer, suggested his value was as a future candidate for federal office.

“I don’t know if you understand how this works, but he had an interest in me possibly running for the U.S. Senate in this election cycle,” Sorenson said in the deposition. “…I would probably be one of the front-runners right now (if not for the ethics investigation). A lot of people believe that.”

(This post was updated at 3:27 p.m. with additional information.)