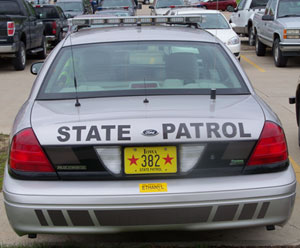 State law enforcement officials are warning that the Labor Day weekend is historically one of the most dangerous holiday weekends on Iowa roadways.

Sergeant Scott Bright, with the Iowa State Patrol, says in 2013, the Labor Day weekend had the second most traffic fatalities among the six holidays tracked by the Iowa DOT.

“Last year, we had four fatalities. One was alcohol-related, so we’re recommending if people get out there this weekend and have too much to drink, they should make sure they don’t get behind the wheel and they call somebody to take them home,” Bright says.

With nearly two-thirds of 2014 complete, Bright says the state is on pace to potentially record the fewest traffic fatalities in decades.

“Last year, we had 317 fatalities in the state, which has been the lowest in over 40 years. Right now, we’re at 193. We’re five ahead of this time last year, so we’d like to see that number go down,” Bright said.

The 317 traffic fatalities last year was the lowest total since 1944. According to Bright, 75 of last year’s fatal traffic crashes were alcohol or drug-related.