You are here: Home / Sports / Cyclones start strong then get run over by Bison

Iowa State pulled out to a 14-0 second quarter lead, then gave up 34 unanswered points to fall to North Dakota State 34-14 Saturday in Ames.

“They run a great program with a good offense and a great defense. They executed very well for the opening game of the season, When you give any team 500 plus total yards, and 300 yards rushing you’re not going to win. When you lose the turnover margin 2 to 0, you are not going to win very many football games. We’ve got a good punter as a freshman, it’s good to see him step up and have that good an outing her in Jack Trice Stadium,” according to Cyclone Coach Paul Rhoads in his postgame comments.

Rhoads says the Bison stuck with their game plan, even after getting behind early, and were able to get their offense going.

“The toll that type of that type offense began to take effect on us. It’s designed to wear you down, and it did wear us down. It got to the point where we couldn’t stop them from getting a first down,” Rhoads says.

It is the second straight season opening loss to an FCS team for the Cyclones. Rhoads says this loss is different than last year’s to UNI and they will come back. “We got a team that is better than us on August 30th of 2014. That’s what happened. You get beat by better teams in athletics, now we improve and try to better ourselves the next time we step on the field,” Rhoads says.

Sam Richardson started at quarterback, throwing for 154 yards with two interceptions. Rhoads says while there were some good and bad things, his overall play was better. He says Richardson showed a difference in accuracy and velocity on the ball than he has in the past and he says Richarson did a better job of going through his progression of receivers. 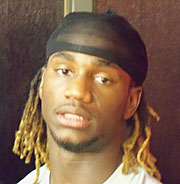 Center Tom Farniok got injured in the game and runningback DeVondrick Nealy says that had an impact on the offense. Nealy says Farniock is the captain of the team and makes the calls that get the offense going. “When he went out, it put a big dent in us and it went downhill from there as you could see,” Nealy says.

Nealy says an injury to receiver Quenton Bundrage also hurt the offense, but says they have to be able to overcome that. “Everything isn’t going to go the way we want it to go unfortunately, that’s the game of football. We win some, we lose some, we’ve just got to move on,” Nealy says.

North Dakota State extended its winning streak to 25 games. Iowa State is back home next Saturday to face Kansas State.