You are here: Home / Human Interest / Former spacewalker looks to the Moon, Mars 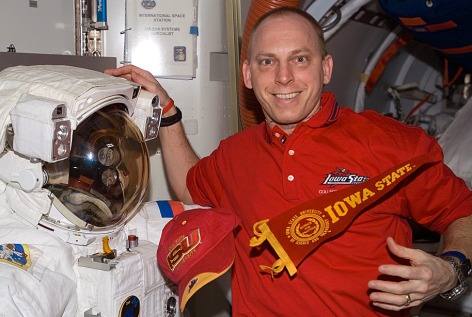 Retired astronaut and Iowa State University instructor Clay Anderson says he misses space and hopes someday all Iowans will have the opportunity to reach orbit.

Anderson calls space a wonderful environment and a beautiful place. Anderson, who got his master’s degree at ISU, admits to gazing skyward from time to time.

“I look at space very longingly now,” he says. “I typically look at sunsets or a meteor shower or the Moon or space and just go, good gosh, I sure wish I could go back there.”

He flew two missions aboard space shuttles to the International Space Station, including a five-month stay there in 2007.

“I’m just very privileged,” he says. “I’ve lived a life where I had a lot of good luck and some good timing, I worked pretty hard and had some great people helping me along the way.”

“Our shuttles were capable of flying a lot more,” Anderson says. “I don’t like being beholden to the Russians who have to take American astronauts to and from the space station. The other thing I don’t like is, I think we should be going to the Moon next to establish a base, to learn how to live and work off the land, like we plan to do on Mars.”

Anderson says it makes more sense to get that experience on the Moon which is a journey of three days away versus six to nine months away on Mars. He believes there will be commercial space travel in the years ahead, making rocket rides more accessible to the general public.

“I hope it’s not just really wealthy celebrities that are doing it,” Anderson says. “We have Lady Gaga getting ready to go and Sarah Brightman, the opera singer, is going to go and that’s all great, but I want it to be people that can buy a ticket and perhaps spend two or three days or a week on a space platform where they get to see exactly what I got to see.”

Anderson, a faculty fellow at ISU in aerospace engineering, is working on book about his adventures.