You are here: Home / Agriculture / Millions of bushels of grain involved in Sioux Center Coop fire 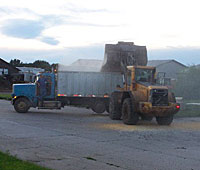 A loader dumps grain from a coop fire in Sioux Center.

A fire inside a massive grain storage facility in northwest Iowa is believed to have been sparked through spontaneous combustion. It started around 5:30 p.m. Monday at the Farmer’s Coop Society of Sioux Center.

It’s unclear how much of the corn will be salvageable. “Our main goal is just to maintain safety for the payloader operators,” Van Holland said. Fire crews from Sioux Center, Orange City, Hull, Rock Valley, Le Mars, and Ireton have been on the scene. 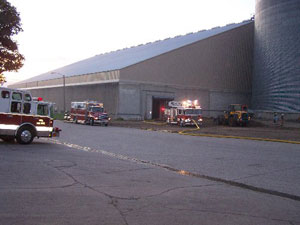 Firefighters had to clear out millions of bushels of grain after the fire at the Sioux Center Coop.