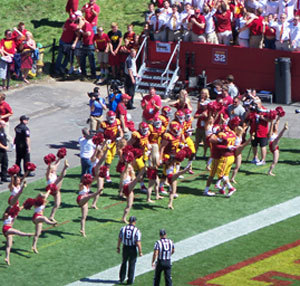 ISU receiver Allen Lazard is congratulated by teammates after his first touchdown grab.

Iowa State got things going in the second quarter after a slow start that saw them fall behind 13-0 to Kansas State in the Big 12 opener in Ames.

Jarvis West returned a punt 82 yards for a touchdown with 12:37 to go in the second quarter, the extra point put the Cyclones up 14-13.

ISU’s defense held the Wildcats again and the offense went on a drive the ended with DeVondrick Nealy’s 2 yard touchdown run with 4:33 to go.  The extra point made it ISU 21, K-State 13.

The Cyclones then pulled out a trick play on a reverse pass from Jarvis West to Allen Lazard. Lazard caught it in the back right side of the end zone, got a foot down and it was a 29-yard Cyclone touchdown with 1:36 to go in the half. The 28 unanswered points put ISU up 28-13.  It was Lazard’s first touchdown as a Cyclone in his first start.

The Wildcats answered with an 84-yard, 10-play scoring drive aided by a controversial pass play where it appeared the receiver was out of bounds at the 1 yard line. But the play stood and K-State quarterback Jake Waters scored on a 1 yard run and that made it 28-20 with: 18 to go in the first half.

The half ended without any more scoring.