You are here: Home / Crime / Courts / ADM principal on leave after arrest at Hawkeye football game 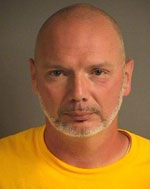 A high school principal in central Iowa was among the people arrested on public intoxication charges at Kinnick Stadium in Iowa City on Saturday. According to a University of Iowa Department of Public Safety arrest report, 44-year-old David Lee Griebel was arrested around one hour after the kickoff of the Iowa versus Ball State football game.

The report states Griebel was “sitting near a garbage can with vomit on his shorts and a pile of vomit near him.” He also had slurred speech and unsteady balance and admitted to drinking beer. Griebel is the principal at Adel-DeSoto-Minburn High School.

The superintendent at ADM, Greg DuFoe, tells Radio Iowa that Griebel has been placed on administrative leave.