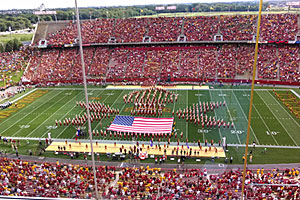 While flags across Iowa are at half-staff on this Patriot Day, remembering the terrorist attacks 13 years ago, Friday marks the bicentennial of the song most-identified with America.

Iowans are getting ready to take part in the nationwide celebration of “The Star-Spangled Banner.”

In Des Moines, the 200-member Roosevelt High School Band plans a Friday tribute on the school’s front lawn. Band director Treg Marcellus served 26 years in the military, so he reinforces to his students the anthem has to be played just right.

“It means a lot to a lot of people including myself so you know, it’s an honor to play it of course,” Marchellus says. “I try to put that across to the students how important it is and to remember all the men and women who have died for our country and they know it’s an important thing.”

It was 200 years ago when Francis Scott Key wrote the lyrics, describing the British bombardment of Fort McHenry during the War of 1812. While the song lasts just over a minute, for some Iowans, the anthem has deep meaning. Joseph Giunta directs the Des Moines Symphony, which performs “The Star-Spangled Banner” before tens of thousands of Iowans every year.

“Well, I’m a patriot and I had two uncles killed in World War Two,” Giunta says. “You can imagine someone knocking on my grandmother’s door and telling her not only one but two sons had been killed in the invasion of Normandy.” Guinta says after the terrorist attacks on September 11th of 2001, he “understood then what patriotism was all about and understood the affect the national anthem can have on people.”

He says he analyzed the words, the verses and now it’s a “great privilege” to conduct the piece. Anna McKenzie, a senior at Roosevelt High who plays clarinet, says the anthem is something they can “always practice because it can never be too perfect.” “I feel like every American should know the national anthem and just kind of like sing along with it,” McKenzie says.

So Friday, instead of “Happy Birthday,” Americans from coast to coast will gather in schools, libraries and football games to sing the anthem in celebration of a poem written two centuries ago.