You are here: Home / Business / Branstad to be questioned Nov. 26 about attempt to fire gay employee (AUDIO) 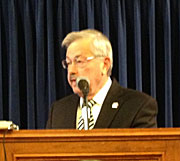 Governor Terry Branstad says he’s too busy campaigning to be questioned about his attempt to force the state workers compensation commissioner to resign.

“I’m very interested and willing to have a deposition, but we’ll have it after the election,” Branstad said today during his weekly news conference. “The election’s only a month and a half away and my schedule between now and then is extremely busy.”

Branstad’s top aides asked Christopher Godfrey, the state workers compensation commissioner, to resign in early 2011 so Branstad could choose his own person for the position. Godfrey had been appointed to the job in 2009 by Democratic Governor Chet Culver. When Godfrey wouldn’t resign, his pay was cut dramatically. Godfrey has sued Branstad, arguing he was targeted for dismissal because he’s gay.

“This lawsuit was filed years ago and the plaintiff has delayed and delayed and delayed it,” Branstad said. “We have totally cooperated in every aspect and I think asking me to have a deposition before the election when my schedule is already extremely busy is not appropriate.”

“I think he’s using the election as an excuse not to give the deposition,” Hatch said, “and not to have the case resolved before the election.”

“For him to delay it is clearly a political tactic that is preventing people from really seeing what kind of a government and management of his government that he has,” Hatch said during a news conference.

The lead attorney handling the case against Branstad is Roxanne Conlin, Branstad’s opponent in 1982, which was his first successful campaign for governor. After negotiations between Conlin and the private attorney Branstad hired to handle the case, November 26 is the date set for Branstad to be questioned under oath in the defamation case. That’s the day before Thanksgiving.

Godfrey resigned from his state post in August to become the chief judge of a federal panel that rules on employee compensation appeals.  Branstad appointed an acting state workers compensation commissioner last week.