You are here: Home / Health / Medicine / Branstad ‘willing to look’ at production of cannabis oil in Iowa (AUDIO) 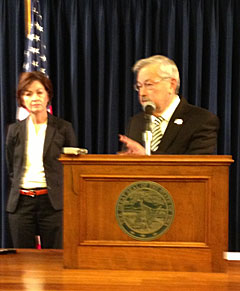 Governor Terry Branstad is not immediately ruling out a request from the parents of children with chronic epilepsy who want to buy cannabis oil grown and produced in Iowa.

“I’m willing to look at all proposals,” Branstad says. “I just want to make sure that the safety of Iowans is protected and that we don’t have unintended consequences.”

Branstad signed a bill into law this spring that decriminalizes possession of cannabis oil as treatment for severe epilepsy, but caregivers must go out of state to buy the product. Last week, six of the 10 members of a legislative committee appointed to study implementation of that law said it’s time for Iowa to make growing and distributing marijuana legal, if it’s used for medical purposes.

Governor Branstad was opposed to decriminalizing cannabis oil possession earlier this year, but then changed his mind after meeting with the parents of children with chronic epilepsy who believe the oil can help reduce the duration and severity of seizures. Now those parents are pushing to get cannabis oil produced here.

“I think you’ve got to be very careful because you don’t want unintended consequences, you don’t want marijuana being grown and then being used illegally,” Branstad says, “so I think it would really depend upon how carefully and strictly it could be managed and controlled.”

The caregivers of children with chronic epilepsy say they’ve seen how cannabis oil is helping children in Colorado, for example, who’ve been able to take cannabis oil.

Branstad made his comments in answer to a question posed during his weekly news conference.