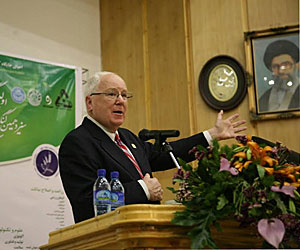 The president of the Iowa-based World Food Prize has returned home from Iran.

Kenneth Quinn was invited to Tehran to speak at a ceremony honoring Cresco, Iowa native Norman Borlaug, a Nobel Peace Prize winner who developed higher-yielding, drought-resistant varieties of wheat that are credited with saving billions of people from starvation.

The former U.S. Ambassador to Cambodia is now hoping to capitalize on the trip. Quinn told the Iranian audience that scientific cooperation is needed across national borders to eliminate wheat rust disease.

“To that end, I invited the Iranian Ministry and the Agricultural Technology Research Institute (of Iran) to send one of their top scientists to the World Food Prize Symposium next month,” Quinn said.

Quinn learned today that the director general of the Seed and Plant Improvement Institute of Iran has been nominated to attend the symposium, scheduled for October 15-18 in Des Moines. Wheat rust disease has been spreading across Africa and the Middle East and, according to Quinn, could affect food security worldwide. In his 25-minute long speech, Quinn suggested there could be “no greater tribute” to Borlaug than if Iran, the U.S., and other countries could work together to eliminate rust disease from the face of the earth.

Quinn received a standing ovation. “I took from that…perhaps there are steps possible that could reduce tension and hopefully alleviate conflict, particularly now, with so much turmoil and volatility throughout the Middle East,” Quinn said. The speech in Tehran took place on August 26.

Quinn spent some time with his wife on vacation in Turkey and Greece before returning to Iowa last week. Quinn said he’ll try to work through the governmental red tape necessary to ensure the Iranian scientist can make the trip to Des Moines next month.