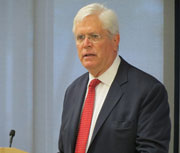 Jack Hatch, the Democratic candidate for governor, says Republican Governor Terry Branstad’s latest policy proposal is nothing more than following through on a new federal law. This is Branstad’s pitch on the plan, from a speech the governor made Tuesday.

“This is the third item that we have brought up as a new proposal in this campaign and we’re calling it a ‘Center for Human Capital Enrichment,'” Branstad said. “This will be a public-private partnership…This would bring together all stakeholders to identify demand, skills gaps and training needs.”

Hatch said this morning that it’s not a new proposal. It’s part of a federal law that the state will be required to implement next year.

“There’s no creativity there. You could be Jack Hatch, Terry Branstad or anybody else. That is what the law required,” Hatch said. “…Does he have any ideas of his own?”

Hatch made his comments during a speech to the Greater Des Moines Partnership, an alliance of 21 central Iowa chambers of commerce.

Branstad spoke to the group Tuesday (find the audio here).

Branstad insists his proposal is unique.

“This is an Iowa approach that focuses on the success we’ve had, but is designed to make sure that it’s coordinated,” Branstad said late this morning, “and that (the state Departments of) Education, Economic Development and Workforce Development are working together.”

Hatch accused Branstad of merely copying the requirements of the “Workforce Innovation and Opportunity Act of 2014” that President Obama signed in July.

“What he did was what any governor would have to do,” Hatch said. “He just accelerated it and embraced it as his own initiative.”

According to Hatch, it’s ironic Branstad is embracing a proposal signed into law by President Obama since Branstad has identified the federal government as the biggest obstacle to Iowa’s economy.

(This post was updated at 12:47 p.m. with additional information.)