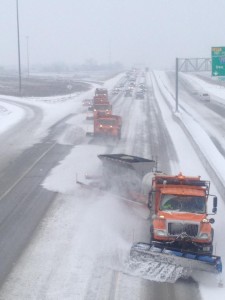 The Iowa Department of Transportation is planning to hire 200 to 300 more snow plow operators than usual for the upcoming winter season.

Andrea Henry is a spokesperson for the Iowa DOT. “We normally hire 300 to 400 (snow plow operators) and this year we’re hiring nearly 600 positions,” Henry says.

The boost in temporary workers is being made in preparation for especially bad winter storms that bring ice, high winds, and heavy snow. “We want to make sure when a big storm arises that we have plenty of coverage and we’re able to cover all routes successfully,” Henry says.

The agency wasn’t always able to do that last winter. “There were times when we needed to pull from other garages or other coverage areas,” Henry said.

Iowans who are interested in work as a temporary snow plow operator must have a Class A or B Commercial Driver’s License (CDL) with an air brake endorsement and be available between October 15 and April 15.

Henry doesn’t anticipate the DOT will have any problem finding the needed workers. “There are a lot of farmers and construction workers who have positions in the summertime and are looking for work in the winter, so we hope we can attract those folks into these winter maintenance positions,” Henry said.

Pay for the work ranges from $11.39 to $16.13 per hour. The snow plow jobs available across the state are posted at: iowadot.gov/careers.