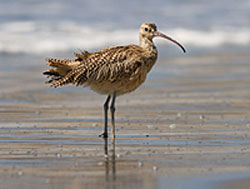 A study by an environmental group is analyzing the vulnerability to climate change of more than 500 species of birds across the Midwest. The Environmental Defense Fund is working with teams of biologists in Nebraska, Illinois and Iowa.

Alicia Hardin, an administrator with the Nebraska Game and Parks Commission, says some birds are becoming more scarce across the region. Hardin says, “We have seen quite a decline in some of our grassland species, especially birds that really depend on larger blocks of grassland.”

The report is finding between one-fifth and one-third of the bird species across the three states are vulnerable to climate change and some of them are beginning to thin in numbers. “Some of those species would be the greater prairie chicken, another one would be the Henslow sparrow,” Hardin says. “There’s also the long-billed cerlew which is a really unique looking bird. It also really enjoys bigger blocks of grassland.”

Farmers and ranchers can take pro-active steps to keep species off the endangered list, or to keep them from sliding further into decline. Hardin says many ag producers are already taking those important steps. “Maybe some of the areas that are on borders or buffers, we would look to see if there’s a way we can take that out of cropland production because maybe it’s not as productive as far as inputs and what they get out of it,” Hardin says. “Instead, maybe put it into perennial vegetation like grasses that might be more appealing to some of these grassland birds.”

Officials with the Environmental Defense Fund say strong, positive incentives are needed for farmers and ranchers to manage and restore habitat in ways that can help offset the ecological and agricultural impact of drought and floods. It can include restoring wetlands, floodplains and grasslands, the use of cover crops, no-till agriculture, and buffers to provide shade and improve water quality.

In other parts of the country, the IDF is developing “habitat exchanges” to help farmers earn revenue for growing wildlife habitat alongside crops and improving drought conditions.