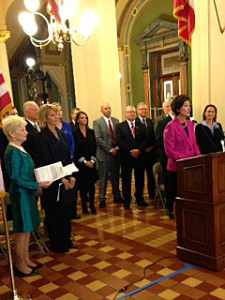 Lieutenant Governor Kim Reynolds says “Million Women Mentors – Iowa” has the goal of lining up 5,000 men and women within the next four years who will mentor teenage girls.

Jana Rieker, a Bankers Trust VP who is co-chair of the effort, says for every 100 females in college, only 12 are taking STEM courses and just three of them will wind up in a career in science, technology, engineering or math.

“So clearly there is an opportunity for us to make a difference by providing mentors for those young women,” Reeker says.

Iowa Association of Business and Industry president Mike Ralston — the other co-chair of the campaign to recruit mentors — says about 1500 adults from 13 Iowa businesses have already signed up to be a mentor.

“Company owners know that we need to make sure that Iowa’s young women and girls and young men and boys are involved in their careers to the highest of their potential,” Ralston says. “and so whether you’re in Waverly or Waukee or Lenox or Sheffield or wherever you are in Iowa, we want to make sure you have access to great opportunities and one way to do that is by having a mentor.”

Iowa is the first state to launch a public-private partnership to recruit mentors for young women.

The women’s basketball coaches at Drake, Iowa State, Iowa and UNI along with the Iowa Girls High School Athletic Union are participating in a “Coaches’ Mentoring Challenge” to connect female students with mentors. Drake University Athletic Director Sandy Hatfield-Clubb says two players on the Drake’s women’s basketball team who are math and science majors are the first to sign up to be mentors.

“As a woman in a male-dominated field, I know first-hand how important mentors can be to building confidence, to building courage and to helping young people achieve their goals,” Hatfield-Clubb says.

The lieutenant governor describes her father as her biggest supporter and he encouraged her to pursue her dreams, but there wasn’t anyone pushing her to consider science or math as a career when she was in high school.

“I think maybe that’s one of the reasons I’m such a big cheerleader for this initiative,” Reynolds says. “When I see teams like their first robotics or their first Lego League, when I see young women and kids participating…and how excited and energized they are…I think I could have been a scientist, too.”

AUDIO of press conference at statehouse, 30:00