You are here: Home / Sports / Hawkeye offensive coordinator: plan is to play both quarterbacks 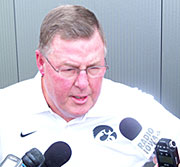 The Iowa Hawkeyes will play two quarterbacks when they host Indiana on October 11th following a bye week. Sophomore C.J. Beathard replaced the injured Jake Rudock at halftime of the game at Pitt two weeks ago and has led the Hawks to consecutive victories.

“If we played today, Jake is about 80-percent, so we would start C.J. if we played today. We feel like we have two good quarterbacks, so we’ll look at it these next 11 days and then we’ll go from there. What you can probably expect is that we will play two,” according to Hawkeye offensive coordinator Greg Davis.

Davis says there will not be a set amount on how much they will play as he says both have earned the right to play and have played pretty well and that’s how they plan to approach it.

Davis says it will all depend upon how much Rudock’s leg injury improves with the off week. “He would have been available the other day in a limited role if C.J.’s helmet would have come off or lost his breath,” Davis says. He says the biggest problem is that Rudock can’t run right now.

Davis says both quarterbacks deserve to play and he is confident they will be able to handle the situation. “They’re are good guys, they’re good players and I think they both know the other guy is pretty good. They are not blind to the fact that the other guy does some pretty good stuff also,” Davis explains.

And the offense could use a spark. The Hawkeyes have struggled with inconsistent play, an anemic running game as well as a lack of big plays. “I’m happy that we’re 4-1, I’m disappointed that we haven’t scored more points. I think we are trying to do what our players are best suited for,” Davis says.