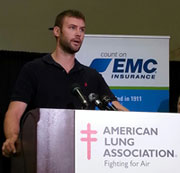 Iowans are being praised for their fundraising efforts for the American Lung Association. In the past 11 years, a “stair climb” event in Des Moines has raised more than $1.5 million.

It’s one of 64 stair climb fundraisers held annually around the country and Lewis Bartfield, president of the American Lung Association of the Upper Midwest, traveled to Des Moines today to recognize several “Fight for Air Climb” participants.

Scott Dean of Des Moines is the top individual fundraiser in the nation for the American Lung Association’s stair climb events. Dean has raised more than $25,000 over the past four years. He’s a member of “Team 27,” a group that was organized in 2010 in honor of Tom Muselman, who received a double lung transplant in 2009.

Muselman’s son, Jason, helped form Team 27 — the top fundraising stair climb team in the country. “The courage he had to go through his surgery inspired us to step up ourselves and really help out the American Lung Association,” Jason says of his father. “We started with four people and we never thought we’d get this big. It’s been an amazing ride.” 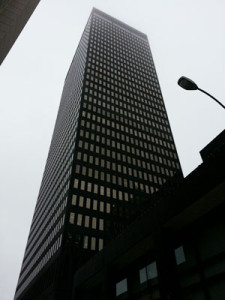 The Ruan Building is one of four downtown Des Moines buildings that will be part of the 2015 “Fight for Air Climb.”

Trent Whipple, a volunteer firefighter in Story City, has participated in the Fight for Air Climb for 10 years. He’s one of dozens of firefighters who compete in the stair climb wearing 70 pounds of equipment. Whipple says they train for roughly five months leading up to the event. “As a volunteer, we only get three or four calls a week, so we aren’t wearing that gear a lot. So, being able to put that on as many times as we can really helps us out,” Whipple says.

Organizers of the Fight for Air Climb in Des Moines have set a fundraising goal of $310,000 for next year’s event.