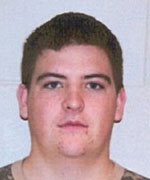 A registered sex offender in central Iowa who has been missing for two weeks is now back in custody. Marshalltown Police had been looking for 21-year-old Mitchell Bendixen since September 16.

He was arrested Tuesday afternoon in Iowa Falls.

Bendixen was last seen on September 16 near the Marshalltown Public Library, which is a violation for a registered sex offender. Bendixen was convicted of assault in Jones County in 2012. One year later, he was arrested for assault with intent to commit sexual abuse.