You are here: Home / Crime / Courts / Father of man who drowned in Missouri says trooper should be charged 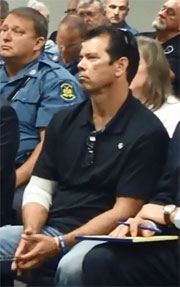 The father of an Iowa man who drowned while in the custody of Missouri’s Water Patrol says the trooper involved needs to face some consequences. Craig Ellingson of Clive was in Missouri Wednesday as a House Committee discussed the Water Patrol’s operations. Ellingson heard how some troopers, who aren’t on the water full-time, are trained, such as the trooper who had his 20-year-old son Brandon in custody when he drowned.

“He needs to be charged with manslaughter. If I did it, you did, we’d be in trouble,” Ellingson says. An inquest jury determined the drowning was an accident. The Highway Patrol Superintendent, Ron Replogle, approached Ellingson right before the hearing started and expressed his condolences for Brandon Ellingson’s death.

Craig Ellingson says he wasn’t sure how to take it. “That’s the first time I’ve been apologized to. And it’s been over 100 days,” Ellingson says. “They drug their feet on the report, it took them until September 4th, my son drowned May 31st, so that’s over 90 days which they kept saying they were going to have the report out in a week, and after the first week they kept stalling.”

Ellingson has asked for a federal investigation, and his attorney says a civil case against the state and the Highway Patrol will be filed before the end of the year. The committed did not discuss the specifics of Brandon Ellingson’s drowning, citing the potential for a civil suit.

Thanks to Mike Lear of the Missourinet