You are here: Home / Health / Medicine / State leaders encourage you to make it a walking Wednesday

The effort to get people in the state moving to make them healthier continues Wednesday with a fourth annual state walk. Delta Dental is one of the sponsors of the Healthiest State Initiative walk. Delta CEO Jeff Russell talked about the walk at the governor’s weekly meeting with reporters.

“We believe the walk is a great way for Iowans to stay active and show their continuing support for the Healthiest State Initiative,” Russell says. “When you combine physical activity and good dental health, we believe Iowa can maintain momentum towards becoming the healthiest state in the nation.” 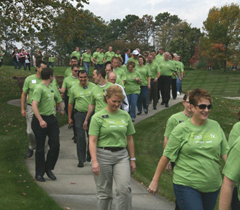 Russell says they encourage Iowans to see a dentist and to do more walking. “A visit to the dentist not only helps protect your dental health, but it can be used to detect more than 120 disease states throughout your body,” Russell says.

Iowa Lottery CEO Terry Rich is the chairman of this year’s walk, and says there will be a wide variety of participants across the state. “The governor, legislators, staff, universities, businesses, churches, some political candidates and their supporters — heck we’ve even called out the National Guard in an effort to get everyone active this Wednesday,” Rich says. The Iowa National Guard is mobilizing soldiers to lead families and residents in 1-K walks at 52 armories across the state.

Rich says they’re asking everyone to log onto  www.IowaHealthiestState.com website to sign up for the walk. “We believe we’ve probably already passed our goal of a half-million folks who will be walking Wednesday, but we’d love to have people register to kind of officially say that we did it,” Rich says. “So, if you will go to the website, we’d appreciate that obviously helping us out.”

Iowa has moved up from 19th to 10th on the health index that ranks the states. Governor Terry Branstad says obesity is the thing that’s keeping the state from moving higher. “It is one of our biggest challenges, and one of the real concerns is the increase in obesity among young people. So, this is one of the important challenges we are facing,” Branstad says.

The governor says other states face the same problem with increasing obesity rates among children. “So, we’re trying to reverse that long-standig trend by getting people more active, by getting people not only to exercise, but also looking at their choices in terms of what they eat,” Branstad says, “encouraging more fruits and vegetables, protein, maybe reduce the amount of carbohydrates, things they can do. Got to get people to take ownership of their own health.”

The governor and lieutenant governor will lead a walk at the State Capitol. In addition, the Iowa Department of Public Health and County Health officials will be leading walks throughout Iowa and schools around the state are gathering students to walk as part of the “National Walk to School Day.”