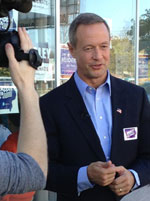 Maryland Governor Martin O’Malley, a possible 2016 presidential candidate, is back in Iowa this weekend to rally with Iowa Democrats. He started his Saturday in Ottumwa and spoke to about two dozen party volunteers gathered at a get-out-the-vote office in Des Moines early this afternoon.

“The work that you’re about to do when you go out there and knock on those doors and go into what a lot of people are feeling kind of down about, the state of their democracy, you have an opportunity to sing a song of hope and a song of better days,” O’Malley said.

This is O’Malley’s fourth trip to Iowa this year, but beyond that investment of his personal time, O’Malley has invested money from his political action committee to hire nearly a dozen staff members who’ve been working on campaigns for Iowa Democratic candidates since early September. Brad Anderson, the Democratic candidate for Iowa Secretary of State, said “there are few people” who have been more helpful to Iowa Democrats in 2014.

O’Malley’s pep talk, though, included an acknowledgment that despite the nation’s economic recovery, middle class wages seem to be “flat-lining.”

“We need more people to get their heads and their hearts around the problems we face as a people and let’s be honest, there’s a fair amount of pessimism out there for good reason,” O’Malley said. “I mean, there’s a lot of darkness in this world. You only need to turn on the TV to see that.”

During an interview afterwards, O’Malley said if Democrats “are going to lead” they have to address “the essential issue” that worries voters: the economy.

“We have to be honest about the challenges we face and the reality of our present is we are going to have any credilibity for offering better choices that move us forward,” O’Malley said.

O’Malley is a two-term Maryland governor who has signed into law an increase in his state’s minimum wage. He also signed a bill into law that grants same-sex couples the right to marry in Maryland. O’Malley, though, didn’t talk today about his work as governor. He briefly mentioned his tenure as mayor of Baltimore and hinted at his affinity for music. O’Malley, who carries a guitar pick in his billfold, plays and sings in his own band and he sent the party volunteers on their way with lyrics written by a British folk band.

“I leave you with the words of that great chorus from the band /Passenger.: ‘So sing and sing at the top of your voice; love without fear in your hearts,” O’Malley said, drawing chuckles from some and an “Amen” from one of the volunteers. “And feel — feel like you still have a choice. If we all light up, we can scare away the dark.’ Go knock on doors.”

O’Malley later noted that he had merely recited the lyrics and refrained from singing them. O’Malley does plan to play at the Braley fundraiser later this weekend.