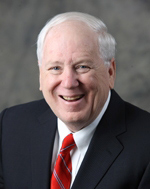 Many of the world’s top scientists, agricultural researchers, and government leaders are visiting Iowa this week for the annual World Food Prize events. Kenneth Quinn, president of the World Food Prize Foundation, says much of the discussion will center around the effort to produce enough nutritional food to feed the world’s anticipated population of 9 billion by 2050.

That discussion will start with a presentation about the current trend lines. “Lots of people talk about the challenge of doing it, but very few – almost no one talks about how are we doing? What’s our trajectory? Are we going to get there? We have one of the really brilliant analytical agricultural economists, Dr. Ken Cassman, and he’s going to say, ‘no, it doesn’t look like it,'” Quinn says.

Other experts will argue we are on course to meet the world’s anticipated food demands 35 years from now. Most believe we’re not going to meet the demand unless dramatic changes are made. Quinn says panelists will tackle some tough questions this week in Des Moines. “What do we need to do? What are the resources and research needed to identify those elements that can changes this trajectory?”

The ebola outbreak will also be a hot topic, as experts from Africa will talk about the impact of ebola on agricultural production. “We, of course, are rightly focused on the health issues, but what are the issues of the countries that are affected, as well as other countries, about this disease or other animal diseases? These are things that can make it even more difficult to meet that goal of feeding nine-billion people,” Quinn says.

The ministers of agriculture from Rwanda, Sierra Leone, and Liberia are scheduled to be in attendance. The president of Sierra Leone, Ernest Bai Koroma will deliver the keynote address on Thursday. Quinn says Koroma is staying in Sierra Leone to manage the ebola crisis, but will address the World Food Prize via video conference.

The Iowa-based World Food Prize was established in 1986 as a way to honor those who make contributions to improve the quality and availability of food. This year’s $250,000 prize will be awarded to Sanjaya Rajaram, who succeeded Iowa native and World Food Prize founder Norman Borlaug as head of a wheat breeding program in Mexico.