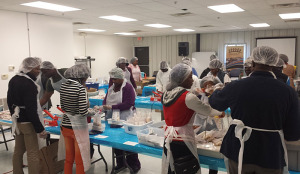 Liberians in Iowa gathered at Outreach’s warehouse in Des Moines on October 4th, to package meals to send to Ebola patients in Liberia West Africa.

An Iowa-based relief agency is sending another round of meals to the West African nation of Liberia. Last month, Outreach Incorporated sent 300,000 prepackaged meals to the country, one of the many that are devastated by the Ebola virus.

Outreach Medical Director Deborah Ann Turner says one obstacle involves transportation. “One of the biggest difficulties, initially, is how do you fund the shipment, because you can have the meals, but they have to get there,” Turner says. Each 40-foot long shipping container has a freight cost of roughly $7,500.

Turner says donations from Des Moines-area churches financed the last shipment and will be instrumental this time as well. Another 300,000 meals are being shipped today and the group has a goal of providing one million meals to the country by the end of the year. A request for assistance came from the Liberian Health Ministry last month.

Turner says it’s hoped that by eating nutritious food, Ebola patients will have a better chance to survive. “Even when I go to do our missions, the patients in the hospital (in Liberia) are only fed if the family brings them food,” Turner says.