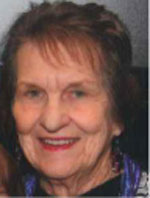 An autopsy is scheduled today on the body of an elderly eastern Iowa woman who vanished over the weekend.

Eighty-one-year-old Constance Runde of Cedar Rapids was reported missing on Sunday. An Operation Quickfind alert was issued on Tuesday afternoon after Runde’s car was found abandoned along a Benton County road near Shellsburg, along with her purse.

A search team later found her body in a creek about a hundred feet away. Cedar Rapids police say the death does not appear suspicious. The Benton County Sheriff’s Office is heading the investigation.