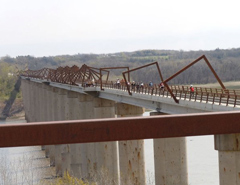 One of the largest grants awarded will help with the expansion of what has already become an iconic trail in central Iowa. “That project is to extend the 25-mile-long High Trestle Trail another 6 miles from the center of Ankeny to the north side of Des Moines,” Diller says. The grant for the project is $782,500 for the trail that includes the High Trestle bridge.

Developers of the Pottawattamie County Trail won a grant of $700,000. “It’s approximately 15 miles of multi-use trail from Council Blufss to Neola. And it’s for phase one of a multi-phase project which will develop a trail throughout Pottawattamie County,” according to Diller.

“We have $500,000s left for existing historic trail bridges, and we plan to have a January 2nd, 205 deadline for applications to use up that money,” Diller says. Groups interested in securing funds for historic trail bridges can contact Diller at the DOT to get application information, or go to: www.iowadot.gov/systems_planning/fedstate_rectrails.htm.

Diller says the six million dollars appropriated for the trails program this year was double or triple what the program normally recieves. And she says there have been some years where the program hasn’t received any funding.