You are here: Home / Fires/Accidents/Disasters / Authorities looking for hit-and-run driver who struck tractor, splitting it in half 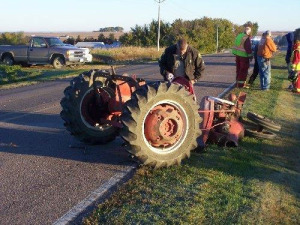 A deputy looks for clues in the hit-and-run involving this tractor.

Authorities say the driver of some sort of red vehicle fled the scene after smashing into the back of a small tractor early Wednesday morning near Le Mars.

Plymouth County authorities are looking for a red vehicle with what they believe may have substantial damage to the right front. The 1940’s era Farmall tractor was going northbound on a county road when it was struck from behind and split in half.

Seventy-six-year-old Mark Schroeder of rural Le Mars was driving the tractor. He was found lying on the road, next to the tractor, and treated at the scene for a head injury. Schroeder was taken to a local hospital, but authorities say his injuries are not believed to be life threatening.

Anyone with information about the accident is urged to call the Plymouth County Sheriff.