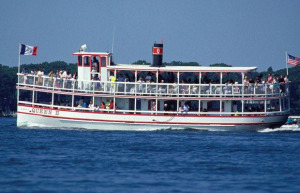 The Queen II on Okoboji Lake.

A popular attraction with vacationers at Lake Okoboji in northwest Iowa is in need of some repairs.

Fundraising efforts for upgrades to the Queen II excursion ship at Arnolds Park Amusement Park are underway. Longtime Iowa Great Lakes Chamber of Commerce executive director Tom Kuhlman is leading an effort to replace the two engines on the boat and refurbish the interior and exterior.

“The engines, being in the state they are, are putting out a lot of smoke. The boat needs to be sandblasted, repainted, and dressed-up to make it look like new,” Kuhlman says.

The residue from the engine exhaust on the Queen II has left a dark black stain on the back of the boat. The two engines are 28 years old. The cost to replace the engines is $100,000.

The original Queen steamer was retired in 1973, after 89 years of service in the Iowa Great Lakes region. Kuhlman helped bring the Queen II to Arnolds Park in 1986.