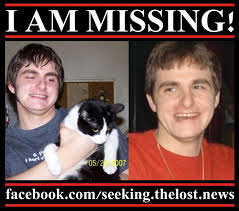 A national tour to highlight cases of missing persons put the spotlight on a six year old Clinton missing person case. Representatives of The National Center For Missing Persons stopped in Clinton Wednesday to help raise awareness of the case of Ben Roseland.

Roseland was last seen February 9th of 2008 when he left a friend’s apartment to walk across the street to a store for something to eat. He was 19-years-old when he disappeared.  Ben Roseland’s aunt Julie Connell said the family hopes for a resolution in the case as she says the vigil is not something to be sad about, it is something to get the message out that Ben is still missing.

Ben Roseland’s sister Helen said the family appreciated the support shown by those in attendance. “You know this happened when I was young, when I was 15, so I couldn’t be there to help out and figure it all out,” Helen Roseland says. She says she was a little shaky coming back to the vigil, but it gives her renewed hope to see that people care.

Another sister-Audra said when her brother went missing the family didn’t know what to do and the community helped out and continues to help support the family. “When stuff like this happens, it really shows how communities and families pull together and help each other. And I really think in this whole process, in this whole journey, that’s something that we’ve really seen from everyone and appreciate,” Connell says.

The family announced that through some fundraising efforts over the past couple of years they have established a $3,000 reward for information about Ben Roseland. Monica Caison helped start the Center For Missing Persons, which is headquartered in North Carolina, and says they make a ‘Road To Remember Tour’ each year to raise awareness about missing person cases along the route.

She says they make rally stops to highlight each case and to feature the people at the rally stops. The year the tour will cover four-thousand miles over eleven states with 22 pre-planned rallies. The center reports there are between 750,000 to 850,000 missing person cases reported annually.