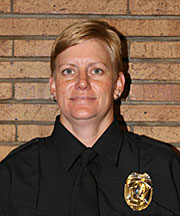 The Sioux City police officer who was shot in the chin earlier this month by a suicidal man is out of the hospital. Sioux City Police Chief Doug Young says Officer Jill Ohm was released from the hospital Wednesday afternoon.

“She’s in very good spirits, but she still has a lot of mending to do,” Young says.

Ohm, who is 37 years old, joined the Sioux City Police Department four years ago. She paid a visit to police headquarters after her release from the hospital.

“The community’s been very supportive and she stopped down to basically just say, ‘Thank you,’ to all the officers that had stopped up to see her and had been supporting her all through this ordeal,” Young says.

Many residents in Sioux City and Le Mars, where Ohm has family and friends, displayed blue light bulbs on their porches and in their windows as a show of support for Ohm’s recovery. No timetable has been set for Ohm’s return to duty.

“When she’s comfortable and once she’s met some of our requirements to come back, when we get that green light, then she’s ready to come back,” the police chief says.

No word from the police chief on whether Ohm’s wedding, set for this Saturday, is going ahead as scheduled. On October 3 Ohm responded to a report of a disturbance involving a suicidal man on Sioux City’s west side when she got into a scuffle with Noah Ironshell and was shot in the chin. Ironshell shot himself in the head a short time later. He died at an Omaha hospital late last week.