You are here: Home / Agriculture / Understudy to Norman Borlaug will accept the World Food Prize 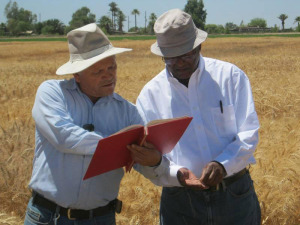 Norman Borlaug with Sanjaya Rajaram working in a field in Mexico.

The 2014 World Food Prize will be awarded tonight to plant scientist Sanjaya Rajaram with a ceremony at the Iowa State Capitol. The 71-year-old Rajaram is a protégé of World Food Prize founder, Norman Borlaug.

“I describe Dr.Borlaug as not only a great scientist and agricultural leader, but also he was an exemplary plant breeder for us because…he was not only the director of the program, he was on the front line doing (work) himself,” Rajaram said. As a post-doctoral student, Rajaram worked with Borlaug in Mexico as he created disease-resistant strains of wheat which improved food security worldwide.

Rajaram remembers Borlaug as a “hard taskmaster” who worked long hours. “One thing I learned from him was that he was a highly determined person. He was not easy to give up. I mean, we would not always succeed and he’d keep insisting,” Rajaram said.

Borlaug, who died in 2010 at the age of 95, called Rajaram “the greatest present-day wheat scientist in the world.” Rajaram succeeded Borlaug as director of the wheat breeding program at CIMMYT. He’s credited with breeding 480 wheat varieties used in more than 50 countries.

Rajaram, who grew up in India, made his comments on the Iowa Public Radio program “River to River.” The World Food Prize Laureate Award Ceremony will be broadcast live on Iowa Public Television at 7 p.m. and will be preceded by a documentary about Borlaug at 6:30 p.m.