You are here: Home / News / Elizabeth Warren urges Iowa Democrats to ‘fight back’ in 2014 (AUDIO) 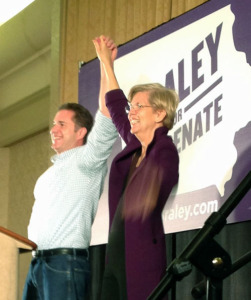 “Republicans, man, they ought to be wearing a t-shirt…The t-shirt should say: ‘I got mine. The rest of you are on your own,'” Warren said during a later afternoon event at the Hotel Fort Des Moines. “…We can hang back, we can whine about what the Republicans have done…or we can fight back. Me, I’m fighting back!”

Warren delivered a populist message, ridiculing what she called the “plumbing theory” of “trickle down economics” and pumping her fists in the air as the crowd cheered her statements. 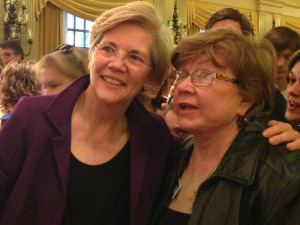 Elizabeth Warren poses for pictures after speaking in Des Moines.

She praised Depression-era steps that reigned in excesses on Wall Street and government investments in education, infrastructure and education. And, according to Warren, priority number one for Republicans will be to “cut the regulations on Wall Street” if Republicans win a majority of seats in the U.S. Senate this year.

“The issue in this race…is a question of who does this government work for,” Warren said, as a man in the crowd shouted: “Us!” and others murmured: “You’re right.”

Warren has been traveling the country for Democratic candidates this year and this weekend she has campaigned for Democratic senators seeking reelection in Colorado and Minnesota as well as for Braley. She’s seen as a motivator for liberal Democrats and for union activists who tend to vote in presidential years, but not in mid-term elections like 2014.

This marked Warren’s first visit to Iowa. Some of those who shook her hand and snapped pictures with her along the rope lines at rallies in Iowa City and Des Moines urged her to run for president in 2016. Warren used part of her speech to talk about her own biography, but she did not address the White House speculation during her visit. Warren has said elsewhere that she will not run.