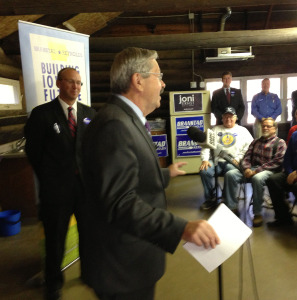 A state legislator from Boone and Governor Terry Branstad drew peals of laughter from a crowd in Boone today with a couple of quips aimed at Bruce Braley, the Democrat who is running for Iowa’s U.S. Senate seat. State Representative Chip Baltimore, who is an attorney, got things started as he thanked the 50 Republicans in the room for showing up.

“I know there’s a lot of farmers in the field and I know that probably as you came in, you probably saw a few trial lawyers out there on combines, too,” Baltimore said.

As the crowd laughed at Baltimore’s reference to Braley’s remark about Senator Grassley’s status as “a farmer from Iowa who never went to law school,” Lieutenant Governor Kim Reynolds and several people in the crowd yelled out “Bailey.” First Lady Michelle Obama’ called Braley “Bailey” seven times during a recent rally in Des Moines before the crowd corrected her.

Then, Governor Branstad, who also holds a law degree but describes himself as a “recovering” lawyer, closed the Boone event with this.

“Since you talked about lawyers and combines, do you know how many lawyers it takes to grease a combine?” Only one, but you’ve got to feed him in real slow,” Branstad said, as the crowd hooted and applauded.

Braley opponent Joni Ernst was there as well and, while she laughed, she did not add her own joke to the mix. Ernst had earlier promised the crowd she’d visit all 99 counties each year if she’s elected, just like Senator Chuck Grassley does. Ernst is in the midst of a 99-county tour of the state, with 49 counties to go before Election Day.

AUDIO of Baltimore, Reynolds, Branstad and crowd in Boone, 2:00