You are here: Home / News / Branstad’s ‘IowaNEXT’ board to cement his ‘legacy’ (AUDIO) 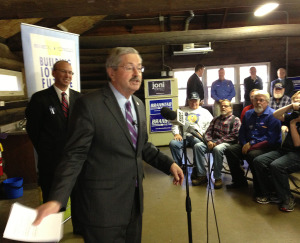 Governor Terry Branstad is unveiling his “legacy” vision for Iowa — a new state board that would coordinate and accelerate state government efforts to improve Iowa’s quality of life. Branstad said today that if he’s reelected to a sixth term next month, he’ll find new ways to pay to improve parks, “cultural hubs” and historic sites around the state.

“Improving these areas is not only good for our overall quality of life, it is also good for our economic growth,” Branstad said.

Branstad would dismantle the legacy of a previous Democratic governor to enact his plan, though, by getting rid of the “Vision Iowa” Board created by former Governor Tom Vilsack. The Vision Iowa board helped direct significant state investment in large-scale community projects like the Iowa Events Center in Des Moines, the National Mississippi River Museum in Dubuque, the River View Center in Ottumwa and the Mid-America Center in Council Bluffs. The “Vision Iowa” board continues to hand out grants for community attractions, but Branstad would replace it with what he’s calling the “IowaNEXT” Board. The directors of four state agencies would serve on Branstad’s new board, along with seven citizen members.

“As Iowa grows and changes for a brighter future, it’s critical that our state build a living, lasting legacy of quality of life enhancements,” Branstad said today during a news conference in Boone. “We want to give Iowans an unmatched quality of life and have a state that is the best place to live, work and raise a family.”

Branstad said he’d “repurpose” some state spending and seek out private funding to accomplish those goals.

“State government spends tens of millions of dollars each year on a variety of quality of life efforts, but we lack an overall vision for the totality of Iowa’s efforts and oversight,” Branstad said.

One of the governor’s ideas is to “transform” the State Historical Building into what Branstad is calling the “iowa Cultural Center.”

Branstad will campaign in Carroll, Harlan and Greenfield today as well. Jack Hatch, Branstad’s Democratic opponent, says Branstad’s “final campaign tour is the capstone on a career misleading Iowans and pulling voters’ attention away from his dismal record of mismanagement, scandal and terrible decision-making.”