You are here: Home / Military / Memorial service to honor soldier who had been missing since 1944 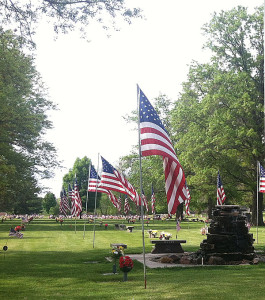 The remains of an Iowa soldier who had been missing for nearly 70 years will be laid to rest today. Iowa National Guard spokesman, Colonel Greg Hapgood, says memorial services will honor Staff Sergeant Maurice L. Fevold.

“He is originally from the Badger, Eagle Grove, Iowa area, and during World War Two the plane on which he was an armorer and gunner — a B-26 Marauder — went missing during the air war portion of the Battle of the Bulge in December of 1944,” Hapgood says. Reports say Fevold and five other crew members, took off from Saint Quentin, France to attack an enemy-held railroad bridge in Eller, Germany. Their aircraft was shot down by enemy anti-aircraft fire near Seffern, Germany, which borders Belgium.

A total of 10 U.S. aircraft were recorded as lost in the vicinity of Seffern during this specific mission. “A few years ago, someone found in the forest near Allmuthen, Belgin the remains of an aircraft, and upon further investigation by the United States government and some private groups, some (human) remains were discovered, and they have just recently been identified,” Hapgood says.

Fevold was among the soldiers identified. The entire crew were officially declared deceased on December 23, 1944. Fevold was 21 at the time he went missing. “Sergeant Fevold was highly-decorated for his service as a crewmember on bombers during World War Two. He entered the service in 1943 and served until he went missing in December of 1944,” according to Hapgood. Fevold’s military awards and honors include the Purple Heart (posthumous), Air Medal (11 awards), Army Good Conduct Medal (posthumous), European-African-Middle Eastern Campaign Medal (with one silver service star), World War II Victory Medal, Presidential Unit Citation, and Enlisted Aircrew Member Wings.

Fevold was preceded in death by his parents and sister, Jeanette Prime. Fevold was born February 21, 1923 near Badger to John and Carrie (Thorson) Fevold. He was a 1941 graduate of Eagle Grove High School. Fevold is survived by great nephews and great nieces: William Bushman of Missouri; Robert Sweeney of Hawaii; Michael Sweeney of Washington; Vicki Riley of Iowa; and Shelly Everheart.

A visitation was held Sunday and other services are scheduled for today. A memorial service will be held at 2 p.m. at the Bruce Funeral Home in Fort Dodge with a graveside service to follow at the Blossom Hill Cemetery northeast of Badger. Modern technology has led to more soldiers who have been missing for decades being identified.

“Since 2006 the Iowa National Guard has the incredible privilege to participate in eight repatriations. Both from the World War Two era and also from the Korean War, ” Colonel Hapgood says. “It’s amazing the lengths our government goes to to recover these warriors and bring them home. And it’s very, very fitting to bring him home and welcome him and give him the honor he so greatly deserves.”

Governor Terry Branstad has ordered flags to be flown at half-staff in Iowa from 8 A.M. to 5 p.m. today in honor of Fevold.