You are here: Home / Business / Neighbors harvest beans for family of man who died in farm accident 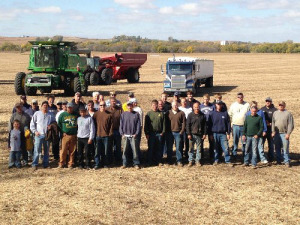 Friends and neighbors harvested the crops on Gene Sitzmann’s farm near Merrill.

A northwest Iowa farmer died Friday evening in a combine accident on a gravel road and the next morning over three dozen of his neighbors showed up for work in Gene Sitzmann’s field. Neighbor Chuck Kellen of Le Mars helped organize the “harvest bee.”

“A lot of friends, a lot of close friends of Gene’s heard about it, started calling me and my brother Bruce and we just got it coordinated as quick as we could just to help out the family in a time of need,” Kellen said. “It’s kind of what neighbors are all about.”

Nearly 40 people gathered in a field about a mile east of Merrill and, within three hours, they’d harvested 200 acres of soybeans.

“We had eight combines, six dump carts and, oh gee, 10-12 trucks and a lot of individuals helping out,” Kellen said.

The same group of neighbors is laying plans for a similar gathering to harvest Sitzmann’s corn. Sitzmann was 55 years old. Authorities say it appears he was pulling a trailer behind his combine. The trailer, which was carrying a soybean head for the combine, broke loose, hit the combine and sent the machine into a ditch. Sitzmann was thrown from the combine’s cab. He was taken to a Sioux City hospital, where he died from his injuries.