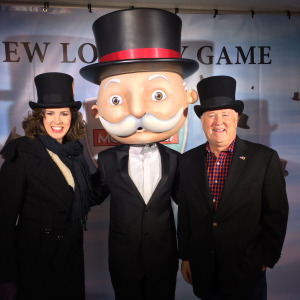 Representatives from the Iowa Lottery are in New York today as part of the start up of a new lottery game called “Monopoly Millionaires’ Club.” Lottery spokesperson, Mary Neubauer, spoke to Radio Iowa from Times Square.

“Everybody is wearing top hats, because obviously the top hat has always been one of the most popular playing pieces in the Monopoly game and it’s going to be the icon for this new Monopoly game,” Neubauer says. “There’s a big Monopoly playing board in Times Square, folks are lined up to play the game.”

This is the first $5 lotto game and she says it also has a new way to distribute prizes. “The idea is to spread the winnings around — so the top prize can only grow to a maximum of $25 million — and then the money that would have gone to help that prize just keep getting bigger and bigger will go for what’s called a shower of millionaires,” Neubauer explains. “So, when someone wins the top prize in the drawing, we will hold a separate drawing to determine million-dollar winners all across the country.”

There could be thousands of million-dollar winners depending on how much money is in the pool. Players can have the machine pick their numbers, or they can pick five numbers and the machine automatically picks a sixth number that coincides with a “property” on the Monopoly board game. 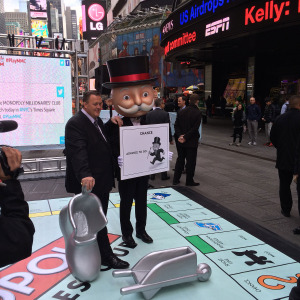 Another twist is a game show. “It will debut in February, and Billy Gardell, he’s Mike from “Mike and Molly” is going to be the host of that game show. He was here today, greeting the crowd and getting everybody hyped up,” Neubauer says.

Players become contestants on the game show by collecting a set of monopoly properties. Neubauer says the game will eventually be available across the country. “Iowa is one of 23 lotteries that are selling the game around the country, but more lotteries are scheduled to come on board by next spring,” Neubauer explains. “So, I think by next year there will be about 250 million people in all of the different states that are playing the game. And the U.S. population is about 313 million so, basically most of the country will be able to play this game by next spring.”

She says the $5 ticket is something new for lotto drawings, but they believe it will go over well. “Lotteries obviously have lots of scratch games for sale at any one time and $5 is the average purchase, the most popular purchase price for people who are buying scratch tickets. Yes, the research indicates that $5 is a very popular playing price,” Neubauer says.

The first weekly drawing for the Monopoly Millionaires’ Club is this Friday at 10:15 Iowa time. There will then be weekly drawings every Friday.

Photos courtesy of Mary Neubauer of the Iowa Lottery.