You are here: Home / News / First Lady returns to Iowa to campaign for Braley’s Senate bid 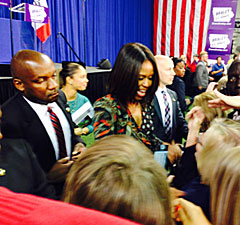 Michele Obama during an appearance October 10th at Drake University.

First Lady Michele Obama returned to Iowa today to appear at a campaign rally at the University of Iowa for Democrat U.S. Senate candidate Bruce Braley.

Obama drew national attention 11 days ago when she appeared at a rally for Braley at Drake University in Des Moines and urged the crowed to support “Bruce Bailey” seven times before being corrected.

Obama addressed that gaffe right away by twice saying emphatically she was there to support “Bruce Braley.” “Some of you may remember the last time I was here,” Obama said and someone in the crowd shouted ‘You got it right.” She replied, “No, I got it wrong, a couple of times. But, I sort of laughed to myself because I though people should follow me home. Talk to Malia and Sasha, because I never call them the right names. I call Barack Bo, it just never works out very well,” Obama laughed.

She said the mistaken name didn’t matter. “Although I may’ve slipped up on Bruce’s name a couple of times, what I know I got right are Bruce’s values. That’s really what matters in these elections,” Obama said. Obama touted the efforts she said Braley has made to make college more affordable and accessible to students.

Obama says the margin of victory for her husband in the 2012 presidential race in Iowa worked out to just 27 votes for each precinct in the state. “I want young people to really hear that number, that’s just 27 votes. That’s why voting matters,” Obama says. She encouraged the young people to go an vote right after the event and told them to get their friends to register and also vote.

Braley is locked in a tight race with Republican Joni Ernst. Ernst is making stops today in Sioux City and Council Bluffs with former Arkansas Governor Mike Huckabee. The First Lady has been out campaigning for Democrats, but the president is making very few appearances.

Governor Terry Branstad said today Republicans are going to benefit from the president’s poor approval rating. “The country is going in the wrong direction. The national debt is approaching 18 Trillion dollars, so we think we have a real opportunity in all four of the congressional districts, as well as winning this Senate seat. Joni Ernst is a great candidate in the United States Senate,” Branstad said.

Branstad said he is happy to see the National Republican Party is putting money into the Iowa races, indicating the closeness of the races.