You are here: Home / News / Michelle Obama in for Braley, Mike Huckabee in for Ernst today 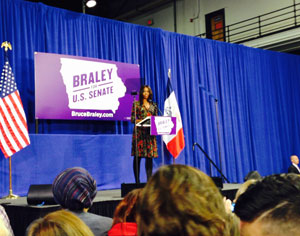 First Lady Michelle Obama will headline a rally at the University of Iowa today with Democrat Bruce Braley. Last week Republican Joni Ernst’s campaign sent out video links of late-night comics who’ve made fun of the first lady for misstating Braley’s name seven times during an event at Drake University. Ernst herself brought it up with reporters on Monday.

“This is kind of her ‘Mulligan’ event, I think, to try and get things right after she messed up so badly the last time she was in town,” Ernst said.

On Wednesday evening, Ernst will be on the University of Iowa campus for a rally with Kentucky Senator Rand Paul. Former Arkansas Governor Mike Huckabee will make stops in Sioux City and Council Bluffs today with Ernst.

During her solo stops, Ernst is stressing her work as a Republican state senator. Braley’s been traveling the state focusing attention on issues like retirement security. On Sunday during a rally in Des Moines, Braley got a big crowd reaction with this statement: “Unlike Joni Ernst, I will never ever vote to privatize your Social Security.”

Ernst has said it might be an option for younger workers. Massachusetts Senator Elizabeth Warren, a rising populist voice in the Democratic Party, campaigned alongside Braley on Sunday. A dozen current members of the U.S. Senate have flown to Iowa this year to campaign on behalf of either Braley or Ernst and that pace will continue through Election Day.