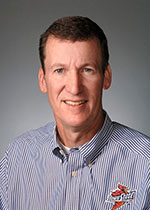 The latest U.S.D.A. crop report says heavy rains in the southeastern two-thirds of the state delayed the harvest and kept thing running behind normal last week. Farmers only advanced the corn harvest by 9-percent last week so that a total of 19-percent has been combined — which is 18 days behind normal.

The soybean harvest moved to 61-percent complete — which is 9 days behind normal. Many farmers have focused first on soybeans in hopes of more drying time for the corn. Tim Trettin farms 1,300 acres near Rockford in northcentral Iowa, and has finished harvesting 600 acres of soybeans.

Trettin says he’s gotten through about 20-percent of the 700 acres of corn. “Yes, we’re drying it, and I think that’s just normal for us here in northern Iowa. It’s very seldom that we do not ever dry the corn,” he says. The U.S.D.A. report says corn moisture was averaging around 21-percent, just about where Trettin’s crop is at this point. “The moisture in this variety that we just did across the road here was running around twenty-one-and-a-half-or-so, which is a nice moisture to be combining corn at,” Tretting says. “And yield-wise, this was corn on corn and it’s running just over 200 (bushels and acre).”

ISU Extension field agronomist, Paul Kassel, covers northwest Iowa and says they were glad to miss the recent rains. Rainfall was a problem at the start of some with many counties getting heavy rainfalls in June. “Parts of Clay, Palo Alto, Kossuth, Pocahontas, Buena Vista, and then a lot of areas had some decent rains in August that didn’t really hurt anything, and then the summer was kind of wet too, ” Kassle says. “Lately we’ve had some nice dry weather, so that’s been kind of beneficial.”

The dry weather let farmers get ahead of the average when it comes to harvesting beans. “We see the soybean harvest pretty well completed this week. A lot of folks are completed on their soybean harvest and are starting on the corn,” Kassel explains. “There’s kind of a two school of thought on the corn. There’s some corn getting down to that 18 to 20 percent so people are harvesting that. There’s some that’s still in the low to mid 20’s and people are looking at the weather forecast and it’s looking good, so they are going to let a field dry as much as possible.”

Kassel says he’s heard the reports of rain in eastern Iowa last week from some of his counterparts and is glad it didn’t hit his area on the way there. “That was a welcome one to miss, because like I say, it kept us in the field,” Kassel says.

He says so far it appears there is enough space to stow the beans and corn coming out of the fields. “A lot of farmers have grown more corn lately in the area, so a lot of farmers have ramped up their on-farm storage, as have the commercial grain elevators — so we’ve got a lot of new storage,” according to Kassell. While he says he’s not heard of any concerns, it may be a little early to assess that.