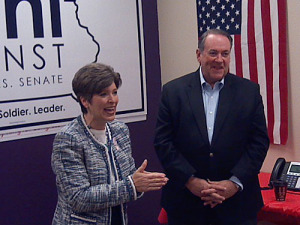 The winner of the 2008 Iowa Republican Caucuses was in Iowa Tuesday campaigning for US. Senate candidate Joni Ernst.

Former Arkansas Governor, Mike Huckabee campaigned in Sioux City, where he says electing Ernst to the Senate is not only important for Iowa, but also for the whole nation.

“She’ll be the first woman to be elected as any member of the Congressional delegation in all of Iowa. But it’s not just because she is a female that she deserves to be elected,” Huckabee says. “That’s important, I think women should have far greater representation in the House and Senate and executive offices across the land. This isn’t about electing her just because of her gender. This is about electing her because of her superior ideas and qualifications.”

Huckabee says if Republicans gain control of the Senate that means legislation will actually make it through congress. “Harry Reed has created nothing less than the Roach Motel of the U.S. Senate, where bills go in but they never come out,” Huckabee says. He says some 360 bills have passed, but they have never left Reed’s office for discussion, debate or a vote.

It was the first of two stops for Huckabee and Ernst, as they also campaigned in Council Bluffs. Ernst is running against Democrat Bruce Braley.