You are here: Home / Human Interest / ‘Sleep-out’ events planned to raise awareness of the homeless 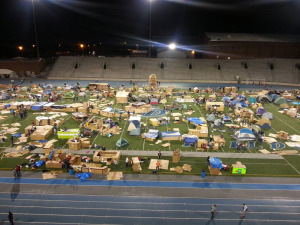 Several organizations across the state will be holding “sleep-out” events in the coming weeks to raise awareness about the homeless.

The 10th annual Siouxland Sleep-Out is scheduled for November 7th, as people will spend the night outdoors at the Lewis and Clark Baseball Stadium in Sioux City. Organizer Cindy Wood remembers the first year of the event only drew a few participants.

“Since that time, literally hundreds of people have spent the night out in the cold and experienced what it might be like to be without a home or a warm place to go for the night,” Wood says.

There were roughly 250 to 300 homeless people in Sioux City last year, according to Wood. Money raised from the sleep-out event benefits homeless shelters and nonprofit groups that provide services to the homeless.

Wood recalls one sleep-out, several years ago, was a real eye-opener for the participants. “We had 50 mile-an-hour winds and a wind chill of 30 below while we were out there,” Wood said. “We survived it, but we’re out there no matter what the weather is because we want to show support and just get a slight feel for what it might be like to spend the night out there.”