You are here: Home / Human Interest / Fans of Bix Beiderbecke mount another push for a postage stamp in his honor 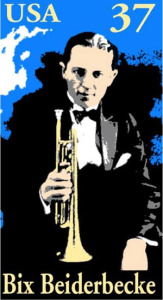 Devoted fans of eastern Iowa jazz pioneer Bix Beiderbecke are launching a movement to have the Davenport native honored on a U.S. postage stamp. Gerri Bowers, the historian for the Bix Beiderbecke Memorial Society, says they’ve already gotten hundreds of supporters for the effort online.

“I’m very excited about it and it’s long overdue,” Bowers says. “This is our third time so we’re hoping the third time’s a charm.” Bix backers tried to get the composer and improvisational coronet player immortalized on a stamp in 1994 and 1996 with petitions to the postmaster, but never got a response.

Bowers hopes the legions of Dixieland jazz lovers in all corners of the map will log-on this time. “There’s more fans out there and because of the internet, we’re able to reach more people and get more signatures,” she says. At last check, the Bix stamp petition had more than 600 signatures on the website dedicated to the effort on change.org.

Bix’s hometown of Davenport hosts a jazz fest in his honor every summer along the banks of the Mississippi River that typically draws followers from around the planet, including all over Europe, Japan and Australia. Beiderbecke was considered one of the most influential jazz soloists of the 1920s is also called one of the most significant figures in the history of American music. He died in 1931.

Bowers says Beiderbecke was a musical genius. “What he’s contributed to the jazz world, it’s long overdue and it’s much better than all the birds and everything else they put on stamps,” Bowers says. “They’ve got Louis Armstrong and Duke Ellington on stamps so, it’s time we put Bix up there.”

Earlier this year, Beiderbecke was featured in an exhibit called “American Cool” at the National Portrait Gallery of the Smithsonian Institution in Washington D.C. His black-and-white picture hung alongside 99 others, ranging from actors James Dean and Humphrey Bogart to skateboarding legend Tony Hawk and boxer Muhammad Ali.