You are here: Home / Education / Regents’ discussion of tuition increase turns to talk of another freeze 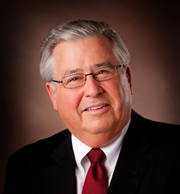 The Board of Regents held a discussion today on a proposed tuition increase at the three state schools. That discussion quickly turned to a proposal for another tuition freeze. Regent Larry McKibben of Marshalltown says he is concerned about figures showing Iowa college students graduating with the sixth highest debt load in the country.

“I’m gonna offer a motion on December 3rd to freeze the tuition for an unprecedented third year in a row,” McKibben says. “I have heard the students, I have heard the folks, I’ve heard families , I’ve heard first-generation families, and I have attended town hall meetings multiple times on your university campuses. we can do better, it can be done.”

McKibben says the TIER measures the schools are looking at implementing will save millions of dollars and that money can be used to help hold the line on tuition. “We can move implementation quicker…we can find the savings and we can listen to our consumers and customers over the next six weeks, we have six weeks to talk about this, six weeks to dialogue,” McKibben says.

Regent Robert Downer of Iowa City says he is concerned about the increase in mandatory fees, especially at UNI. “The effect of all of this is, when you put the mandatory fees in there, the increases for the University of Iowa and for Iowa State University are below 1.75-percent. For UNI, it’s 2.6-percent when you add the fees in there,” Downer says. “It seems to me that this is something that needs to be looked at as well.”

Regents president Bruce Rastetter of Alden also says he would support another freeze on tuition. “I think over the last 60 days as we learned more and more about the TIER opportunity and the opportunity for efficiency savings — brings into my mind, the question of why are we raising tuition? In particularly when we have the support of the presidents and institutions at implementing those significant savings that we’ll be talking about in early November, ahead of our tuition support.”

Rastetter says he is also concerned about the impact on graduate students. Rastetter says they board approved lowering the tuition rate for in-state and out-of-state students at the U-I law school, and then saw a record incoming class and more revenue generated. The board did not take any vote on the tuition issue today at their meeting in Iowa City.