You are here: Home / Human Interest / ‘Sea Lark’ dance by famed choreographer to premiere in Iowa 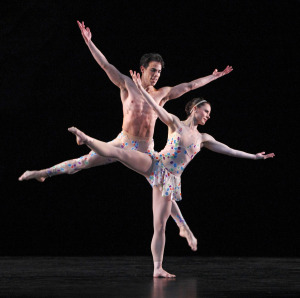 Central Iowa will host a rare event in the arts community next month — the world premiere of a new dance created by one of America’s foremost choreographers, Paul Taylor.

Francisco Graciano is a member of the New York City-based Paul Taylor Dance Company and says dance fans in the region will be thrilled to hear the first public performance of this piece will go on stage in Des Moines.

“It’s a very significant thing to have any dance premiered anywhere, especially Paul Taylor,” Graciano says. “Paul’s been making dances for a while. This is his latest opus.”

The dance is called “Sea Lark” and it’s the 84-year-old Taylor’s 141st major work in his six decades of choreography.

The performance will include ten members of the 16-person team as they depict enjoying a carefree sail on the ocean. “Paul has always had a fascination with the sea and for any nautical stories,” Graciano says. “It’s sort of his expression of his love for the sea and the culture that happens out there.”

Legendary composer Andrew Lloyd Webber was in Des Moines in mid-September to take in a production of his “Phantom of the Opera” at the Civic Center and likewise, Taylor will be there for the dance debut.

“He’s really interested in seeing how premieres go and he wants to oversee every single detail,” Graciano says. “It’s his work going out there and we’re the face of his work so, he wants to make sure everything goes out as planned.”

The troupe will be in Iowa for one show only, November 8th at the Des Moines Civic Center.