You are here: Home / Education / Students protest proposed tuition increase by Board of Regents 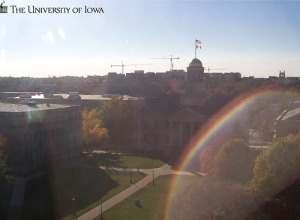 A late afternoon photo from the Pentacrest camera.

Students sat in a circle using typewriters on the University of Iowa Pentacrest Wednesday protest against proposed tuition increases. The demonstration included more than fifty people who waved signs and chanted, “No more tuition, no more fees, education must be free,” as the State Board of Regents met in Iowa City.

Graduate student Melissa Zimdars says the typewriters are in response to critics who say student debt is due to lifestyle choices. “We kinda made up a little joke that we could save a thousand dollars if we use typewriters instead of buying laptops. So, here we’re showing we are leading fiscally responsible lifestyles by using technology that we had around our homes instead of going out and buying new Mac books,” Zimdars explains.

The Board of Regents will meet again today in Iowa City and will discuss the first tuition increase after two years of tuition freezes. The students held signs saying: “I’m not a loan” and, “Don’t Balance the Budget on Our Backs” Zimdars says they’re protesting the gradual defunding of higher education not only in Iowa but across the country.

“Twenty years ago, the Iowa Policy Project found that 67 percent of the public universities’ (budgets) were funded by the state and today it’s only 35 percent. So, the states are primarily funded by tuition dollars, which have gone up 75 percent when adjusted for inflation since the 1990 school year,” according to Zimdars. “So, obviously students are paying significantly more now.”