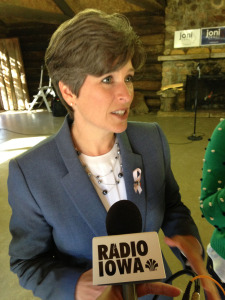 Joni Ernst, the Republican candidate for the U.S. Senate, has so far declined invitations to speak with a handful of Iowa newspaper editorial boards, information that became public Thursday morning after The Des Moines Register revealed Ernst had cancelled a Thursday appointment with the paper’s editorial writers.

Sarah Benzing is the campaign manager for Bruce Braley — Ernst’s Democratic opponent — and Benzing spoke during a conference call arranged by the campaign Thursday afternoon.

“We don’t hide from questions or fail to have an open and honest debate,” Benzing said. “We talk about the issues, we lay out where we stand and that’s exactly what voters deserve from Joni Ernst and Bruce Braley.”

“It’s one thing to stick to talking points at events,” Benzing said. “It’s another to sit down with an ed board and answer tough questions.”

Ernst answered the questions of reports from Radio Iowa and other media outlets, including The Register, twice this week after campaign events in Boone and Des Moines. The Ernst campaign said this morning it is “still in the process” of scheduling some of the meetings between the candidate and newspaper editorial boards. But Ernst campaign spokesperson Gretchen Hamel says “recent editorials in The Des Moines Register make their position in this race perfectly clear” and the Ernst campaign decided with less than 12 days to go, Ernst “wants to spend every minute talking to undecided voters.”

Ernst also had invitations to meet with editorial writers for The Cedar Rapids Gazette, The Dubuque Telegraph Herald, The Quad-City Times and The Waterloo Courier. She met earlier this week with the editorial boards of The Sioux City Journal and The Omaha World Herald.

Ernst won The Des Moines Register’s endorsement during the Republican Primary in June, but the Ernst campaign cites five recent editorials in the newspaper that criticized Ernst’s past statements or positions on issues for leading to the campaign’s decision to cancel a meeting with the paper’s editorial board.

The Des Moines Register endorsed Mitt Romney late in the 2012 campaign after Romney met with the paper’s editorial writers in a barn on a farm near Adel. President Obama had granted the paper an off-the-record interview that became public after the paper’s lead editor concluded Obama’s statements about his post-election agenda were newsworthy and merited publication.

(This story was updated at 10:04 a.m. with additional information.)