You are here: Home / News / Chris Christie this past weekend, both Clintons this week 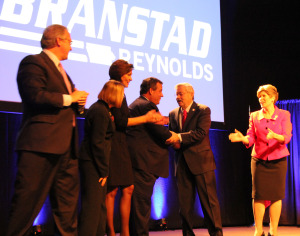 New Jersey Governor Chris Christie — the big name get for Branstad’s “Birthday Bash” — used most of his 15-minute speech to blast President Obama.

“We’ve now had six years where the world has been adrift because of the lack and failure of American leadership,” Christie said.

“Chris Christie is actually here to film a movie sequel: ‘The Closed Bridges of Madison County,'” Klobuchar said, to laughter from the crowd.

Last fall aides to Christie ordered lanes on a heavily traveled bridge to be blocked, causing traffic snarls in a town where the mayor had not endorsed Christie’s bid for reelection. Christie has said he had no knowledge or involvement in the bridge closure. 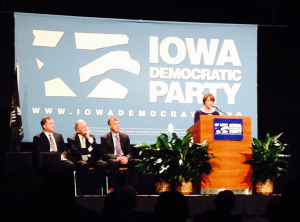 On Sunday at noon, Iowa Democrats launched a tour designed to hold an event in each of Iowa’s 99 counties within 24 hours. The blitz will conclude with a rally in Davenport late this morning featuring Vice President Joe Biden.

On Wednesday, former Secretary of State Hillary Clinton will headline two campaign rallies in eastern Iowa for Bruce Braley, the Democrat running for the U.S. Senate, then her husband — former President Bill Clinton — will campaign here for Braley on Saturday.