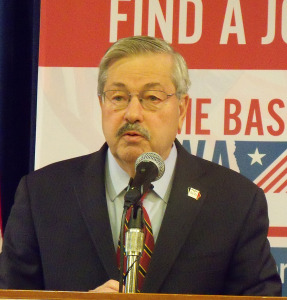 Governor Terry Branstad says he won’t institute a quarantine at Iowa airports for people who may’ve visited countries impacted by the Ebola outbreak. Some governors have done so, but Branstad says anyone who has visited those countries will first come through a larger airport where they would be subject to quarantine.

“I don’t see a need for us to do it. I want to do everything I can to protect the safety and well being of Iowans,” Branstad says. “What they’re talking about is where they come directly from western African nations where they have this epidemic into their airports. And they want to protect their citizens, so that’s a little different situation. There’s a few airports in this country where you have flights from those countries, but Iowa is not one of them.”

Branstad, a Republican, says he supports the decision of his counterparts in other states like New York and New Jersey who have put the restrictions in place. “The federal government has really mishandled this, as they have mishandled a lot of other things, and I understand the great fear that people have about people who have come back and then have Ebola. We don’t this epidemic to come to the United States and governors are doing what they can to protect the safety of their citizens,” Branstad says.

The governor says he’s kept up to day with the state health director about preparations if there were to be a case of Ebola in Iowa.

“He has shared with me all the work that’s been going on with Iowa hospitals and with the EMS workers in Iowa and with local public health people,” according to Branstad says. “And it’s my understanding that we have not had any cases of Ebola here — although there is grave concern — and we want to do everything that we can to make sure it doesn’t get here.”

Branstad credits the health care professionals from the U.S. who have tried to help stem the epidemic. “I also, having been president of a medical school, am very appreciative of the young men and women who are willing to go overseas and provide medical services to people in places like Africa. We did that at Des Moines University,” Branstad says.

On another topic he was asked if he would support the effort to freeze tuition again at the three state-supported universities. Branstad says he can’t commit to the freeze just yet. “I am appreciative of the fact that they are looking at a third year of freezing tuition, recognizing that during the Vilsack administration we saw tuition increase as much as 17 and 18-percent a year. And that created a great burden for students and their families,” Branstad says.

The governor says he likes the idea, but has to see the total budget before saying he can support the freeze. “I believe that the regents are on the right track. We have to wait until we hit the December revenue estimate to decide what we are going to recommend in the budget, but I am very optimistic at what the regents are looking at and I think they are doing a good job,” Branstad says.

Branstad made his comments at his weekly meeting with reporters.