You are here: Home / News / Vice President Biden campaigns with Democrats in Davenport 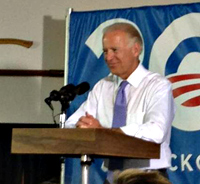 And he says the upcoming election is more important than 2008 and 2012 because of the rising influence of “right-wing conservatives.” “This is not your father’s Republican Party. If we don’t stop the march of the Tea Party now, those majority republicans who know better are never going to have the courage to stand up and vote the right way,” Biden says.

Braley continues to trail his Republican opponent, State Senator Joni Ernst, by a small margin in the polls. Biden directly attacked Ernst and her views on education. He chuckled several times before saying, “She’s amazing,” and then was interrupted by someone shouting in the crowd, before continuing, “No no no no no! She’s backed an old bad idea: Eliminate the Department of Education. You know, they’ve tried that one once. You know, I mean, twice, three times, five times.”

Biden’s visit wrapped up the Iowa Democratic Party’s 99-in-24 tour, an effort to campaign for candidates in all 99 counties in 24 hours. Ernst is on the campaign trail today with Republican U.S. Senator Chuck Grassley as she is in the midst of visiting all 99 counties.